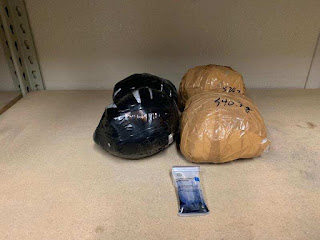 At the station, the kettlebell packages tested positive for methamphetamine, with a combined weight of 4.6 pounds and an estimated street value of $8,740.
The narcotic packages were turned over to the Drug Enforcement Administration (DEA).

There have been multiple kettlebell
meth seizures this month.
Taken from the CBP Press Release
https://www.cbp.gov/newsroom/local-media-release/border-patrol-agents-seize-kettlebell-shaped-meth-packages
Border CBP Meth