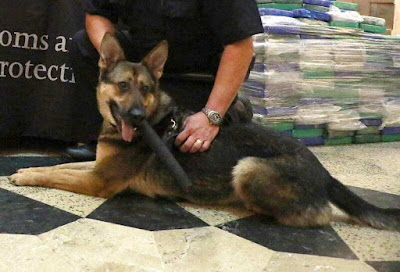 Philadelphia CBP K9 Proves Practice Makes Perfect with Outbound Marijuana Seizure during TrainingPHILADELPHIA – Coaches always preach that practice makes perfect and that the more you train, the better you perform.

This axiom was clearly on display Tuesday when a U.S. Customs and Border Protection (CBP) narcotics detector dog team in Philadelphia discovered nearly 500 grams of marijuana being shipped from San Francisco to Barcelona, Spain while practicing detection skills in an air cargo hangar.

K9 Dasha caught the marijuana scent in a postal parcel manifested as “Zoomingos Monkey with Banan” that was packaged in an outbound mail container. The CBP K9 officer opened the package and noticed a silver pouch that contained a single bag with 468.4 grams, or about one pound, of marijuana.

The CBP K9 team seized the marijuana, which has a street value of about $800.
L 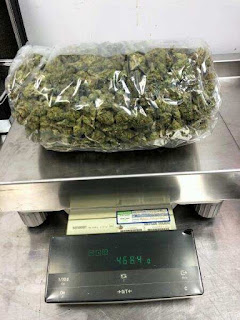 “Customs and Border Protection officers remains steadfast in our commitment to disrupt narcotics smuggling attempts, and our highly-skilled narcotics detector dog teams are on the frontline of this effort,” said Casey Durst, CBP’s Director of Field Operations in Baltimore. “Illicit narcotics interdictions is one way in which CBP contributes to the safety and safety of our communities.” CBP officers screen international travelers and cargo and search for illicit narcotics, unreported currency, weapons, counterfeit consumer goods, prohibited agriculture, and other illicit products that could potentially harm the American public, U.S. businesses, and our nation’s safety and economic vitality.

CBP seized an average of 4,657 pounds of illicit narcotics every day during 2018 across the United States. Learn about what CBP accomplished during "A Typical Day" in 2018.

Learn more about CBP at CBP.gov.